When I awoke New Year’s morning in 2020, I knew I must begin the New Year with something terrifying.

Since I turned 75, I have backed off some beginnings, things barely begun because failure seems imminent. But this New Year’s I needed a breakthrough, as a sort of mascot standing against things prematurely abandoned. You may remember an earlier post, when I mused about running between holes on the course, but then I quit, remembering that, after all, I was 75 years old.

New Year’s morning it was cold and rainy here in Seattle, and I was 77 years old. It was now or never. Grit your teeth and do your thing for the New Year. I pulled on some golf shoes and rain pants and, armed with only a 6-iron, I resolved to run between every shot on every hole on the long and hilly 9-hole Par 3 near my home. 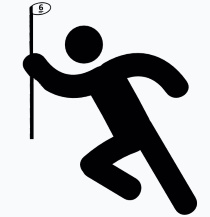 I had heroic visions of the Winter Olympic Biathlon, where contestants race on cross-country skis between shooting stations, and where – short of breath – they shoot for scores on targets in the snow. Within short seconds they sling their rifles across their back and take off again on the course, pushing and gliding over 12 miles of hills and forest and snow. I have heard in one story that Swedish or Norwegian Army Ski troops developed this training when Nazi (or was it Soviet?) invasions were threatening. Nothing like a flawed metaphoric daydream to get your blood going.

So while the New Year’s Eve drunks snored snug in their beds, I now faced the wet, empty course. I had heard that at one time the golfing legend Lee Trevino had been a pobre in Texas and could only afford a 6-iron. He needed to support his family with whatever he could earn with that 6-iron. I don’t remember if it these were local tournaments or just side bets, but he says he learned the most about golf having to do everything with that one club.

The first tee box was on top of a slope, about 100 yards from the hole, an easy swing with a 6-iron. No one waiting (and no one watching), I swung away. The ball went sailing very high and very straight, arcing up and bending down toward the green. And then I remembered to run…I lept into space from the elevated tee box. With my eyes up to the sky watching that glorious ball, I landed running and almost turned my ankle. I was many yards down slope of wet grass, before the ball hit and stopped on the green, 4 feet from the hole.

Somewhere in those moments I realized I had no putter. As I jogged up to the ball, I reckoned I could tilt the 6-iron and putt with it. Just missed a birdie from 4 feet, but had an easy tap-in for a Par. I conserved my energy by mostly walking between the greens and the next tee box.  On this winter day, the whole course would be about a mile-long slosh over mushy grass that blanketed cold mud underneath.  Every running step sank in a few inches and made a frigid splash. It took straight shots that didn’t get lost. Not only my eyes, but my legs were following the ball in flight. I felt like a kid running after my balls…no…maybe like a dog after a slobbery tennis ball.

By God, I was going to make it through this course in under 30 minutes! I was panting hard and trudging up to the last tee box when I discovered there was someone else on the course, a family of four standing at the last tee box. I would have to stop for them to play that hole. It was a good excuse to stop, and I welcomed it. But the family had looked back before they teed off, and had seen me laboring up the hill to the previous hole. As I staggered up to wait at the tee box, the father said, “Want to play on through?”

I did. Of course I did. They watched as this crazy old man finished his first successful resolution on this cold and drizzly New Year’s morning, and further resolved to start things that were even more terrifying…as soon as he could catch a breath.