During my 75th year, Golf was waiting patiently for me to get a few things out of my system.

In the 58 years since I had my Physical Education quarter in Golf, I made a few miserable attempts to go out on the course with friends. A few demons emerged that I would have to take care of if I were to start golf at age 75. Since I had been in the high-tech world of Seattle, I thought that (of course) new technologies could take care of all my problems.

One problem in those misadventures was that I continually lost balls off the tee, and spent most of the afternoon flummoxing around the woods and brush which bound the fairways in Seattle. I lost enough balls to dent my next paycheck and held everyone back at almost every shot. They were kind –but it was not fun. Through the semiconductor years and the software development years, I kept swearing I would try golf again if they would develop a signal-emitting ball that I could track with my cell phone via satellite. Actually, for a number of years I felt safe that they would never develop one, since it would also continue emitting signals from far underwater, where a number of my other balls also rested. Who needs a symphony of lost balls sending gargling signals from under the lily pads.

And then someone invented the locatable ball that would beep on your cellphone screen and lead you to itself. It was some British firm (whom Americans inevitably trust) that said they had a start up company and would have the balls for sale in the next spring. However — so I wouldn’t miss out — they would gladly take orders to deliver the first ones them. I gladly put down $36 for six of them, ready to begin golf anew when they were delivered. It has been two years now, and the balls are not here yet. Perhaps they lost my address. I’ve lost their address and the official-looking receipt they sent, so I am hesitant to call it a scam. I would never have started golf again, but a YouTube video showed me how to hit the ball somewhat straighter, and that was better than having a forest locator anyway. (I’m still expecting to see those magic balls in the mail…any day now.)

The other problem I had with golf was dragging 12-14 clubs around, up and down hill and dale. I had yet to learn why they would saddle the novice with all that iron. (I still am not sure why you need that many clubs.) So then I saw the single telescoping club that would fit into a briefcase, and whose head would adjust to every loft, (and even become the putter). I thought that (- wow -) with that freedom, with essentially a single length club, my path into golf would be significantly shorter. There are a few makers of these multiple head clubs, and the Divnick one I got was quite sufficient to learn the game in one stroke, so to speak, just changing the loft to get more distance, or more height, out of the very same club. I do think that adjustable single head and one single club length, accelerated my understanding and made my single stroke a more manageable way to learn. 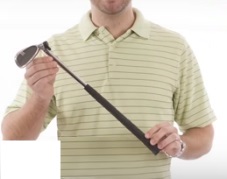 Not everyone would agree that this was the best way to begin, but I started out in the cold and wet December of my 75th birthday mastering this single club, and making decent progress on the 1500 yard 9 hole “executive” course near my home. I was 75 years old and what they call a “super senior”. That short course costs me $6 even today.  Full of novice gusto,  I even considered running between holes with that one adjustable club, and I understand there is actually an official variation called Speed Golf. But after jogging a couple of holes I realized I was 75 years old, after all, and not half-equipped for this kind of biathlon. (Possibly you won’t be either.)

I don’t regret either of these bizarre avenues for you to get into Golf in your belated years. Later I determined a mix of some traditional methods and many new trade-offs which befitted my age. We’re all different — especially by age 75, and hopefully you will see a path into golf which is not quite so convoluted.