If you are anywhere near age 75 you probably remember watching the “Six Million Dollar Man”, a series on black and white television. This “Bionic Man” had been a test pilot in a bad airplane crash, and a team of scientists rebuilt him. His powers were augmented to be far better than before: to run faster, lift more, jump higher and last longer than ordinary humans.

There was no warrantee, of course. This Bionic Man was only a test case. Nevertheless, on TV he became useful in foiling bad guys and Russian spies during a few seasons of TV shows. Then (really!) along came the Bionic Women who could run as fast, lift as much, jump as high and – well – last longer than the Bionic Man… What we don’t remember so well was that this Bionic Man and Woman were also engineered for resiliency against hard landings and various pummelings by Nature and humans alike.

In this built-on resiliency, the Bionic Man was also like medieval knights in armor who jousted in tournaments and thrashed at each other with broadswords on the ancient battlefields. Which brings us at last to you. At 75, you may need several aids for resiliency in your golf game. When you saddle up for golf, you are likely to sling on a protective back brace against the stress and violence of swinging a driver for maximum distance. But that may just be a start.

Alas, the ball does not seem to fly as far for you as it does with younger players. Your challenges are different, but nonetheless real. You need the engineers to rebuild you for performance like the Bionic Man, and to protect you from injury like the medieval knights. Much of what you will need is in a well-stocked drug store, but today you can find much more online. (By the way, the price is way below six million, and you don’t need a horse.)

Here are a few items for your bionic build up at 75 years old, starting from the arms. Some kibitzers will tell you not to bend your wrist when you swing, but stop action on any professional and you’ll see that is pure malarkey. When you contact the ball your wrists become the focal point of your whole body. Wrists are one of the main injuries suffered by professional golfers. Wrist brace devices can be just an adhesive wrapping, or become more rigid – and expensive – with splints build into the front and back. What you will not find is a side brace, or even a pocket for it. 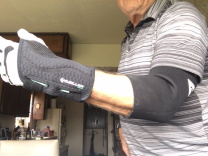 My wrist suffered from what is called Ulnar Deviation injury, which created a painful sprain when I missed the ball. If I hit the ball, it felt fine. Now admittedly the pain itself is a superb training aid, but I created just the right resistance by cutting a piece from a cowhide leather belt, and slipping it under the side of a golf brace in addition to the regular (back of the hand) splint. My arthritis doctor said she loves it when patients create ways to alleviate their own pain…

Going one direction from your wrist, you (or a good friend) must lace thumb braces on you like a Victorian corset. Back up the arm in the other direction, you can support “golf elbows” with stretch bands, or foam sleeves, or supports which wrap separately around your forearm and lower bicep. Usually these elbow braces support your lead arm (left if you are right handed). Also, there are massage therapies for Golf Elbow, as I note in another post (“In Arms Way.”)

It strikes me now that this subject of creating the Bionic Self is broader than just one post, because we still have back and hips and knees and ankles. So I guess we will have to continue with at least one more post. Believe it or not, there is good news here. Younger athletes use supports for various occasional injuries but used together these supports can make an entire suit of armor for we 75-year-olds men and women. Just find “The Merry Band of Bionic Golfers – Part 2”, for a variety of back and hip braces, and then finally knees, and ankles. We’ll even investigate battery-run electronic aids to make you truly bionic in your own home.